If you are not in the area supported by 62 Squadron (primarily Grimsby, Smithville, Jordan) you can find a squadron near you with the registration tool here. Online Registration Tool

Squadron Headquarters is in Grimsby at Mountain Ridge Community Centre, 105 Mountain Street on most Friday evenings between 6:30 - 9:30 p.m. September to June.

Requirements
Joining Air Cadets is easy, wherever you may be in Canada. The requirements for membership are:

Documentation
You will be required:

A new Cadet starts training with the Squadron as an Air Cadet Recruit and undertakes the recruit-training course. Courses run several times each year. This program of fundamental drill and general cadet knowledge is designed to allow the recruit to become better equipped to become a part of the Squadron. The recruit program introduces recruits to the orders and regulations of the Air Cadets. Upon successful completion of the program, recruits are placed into their appropriate level for training, either Level One training, or Level Two training, depending upon their age.

The first step in becoming an Air Cadet is the completion of the recruit training program. The course is approximately 6 to 8 weeks, is designed to welcome the recruit into the Squadron and provide the new cadet with an introduction to the customs and formalities of the cadet organization. The new recruit learns about military time, basic drill, rank structure, Squadron history, how to wear a uniform and an introduction to all of the many activities that go on in the Squadron.

All new recruits are expected to be dressed to Squadron standards:

After the completion of the recruit training program and being sworn in, usually about 6 weeks after joining, the recruits will receive a complete uniform on loan from the Department of National Defense, if their attendance and behaviour are acceptable.

Uniforms remain the property of the Department of National Defense and must be returned to 62 Squadron in good condition when the Cadet leaves the unit.

Finally, when the recruit's paperwork has been completed and they have been sworn in the recruit is free to join any of the regular cadet programs such as the drill team, the band or sports competitions to name a few.

To help introduce new recruits and their parents to the cadet program a special information night is held prior to the start of the course.

If you have any questions please contact the Squadron. Contact info is at the top of the page. 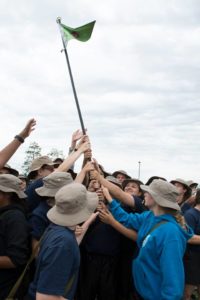